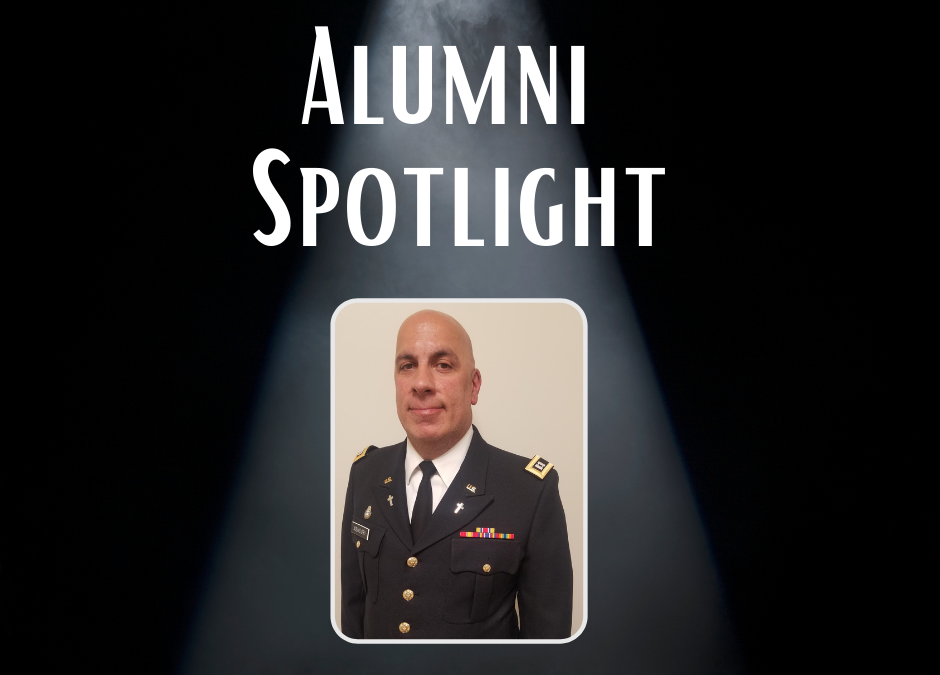 Amir graduated (with a Bachelors degree) from CCC in 1998. Three days later he married his best friend, Cathy. They have been married for 22 years and have been blessed with two beautiful children. When his children were young, he enrolled at Liberty University where he completed three Master’s Degree Programs: Master of Arts in Religion, Master of Divinity in Chaplaincy, and a Master of Human Resources and Counseling.

“When I enrolled at CCC at the age of 18, I never imagined my ministry would be so diverse. Today, as I serve God as He has led me, I am so grateful for the opportunity to minister the Gospel to both civilians and to the men and women who serve and protect the United States of America.”

The road to chaplaincy was not without obstacles but Amir pressed on. The following story by Amir was originally published in ONE Magazine, Aug/Sep 2017, Amir’s Journey.

Life is a journey. As we age and move through life, we take many steps and our paths turn, change, and sometimes even double-back and cross the path we followed originally. Recently, my life’s journey took a surprising turn. Even before God called me to preach, I was burdened for people who didn’t know God’s forgiveness. I wanted everyone to know the same peace and purpose I received from God when I was young.

As I matured and grew in faith, I began to have a deeper respect and a special burden for military personnel and their families. I developed a habit of reaching out to individuals I encountered in my everyday life who were active military. With each hand I shook and each personal story I heard, my desire to minister to military families grew heavier until it became a gnawing need.

When I was asked to visit a hospital to be an encouragement to a young mother whose daughter was having spine surgery, I had no idea I was starting a new path in my life journey. The little girl was afraid and wanted her dad to be with her at this difficult time. Her dad was a soldier deployed in a foreign country. Linked in the hospital room via computer, he tried to comfort her. I prayed with the family and waited with the mother for the surgery to be over. I knew from talking with the father he was emotionally worn and concerned for his child.

When that soldier returned home, he came by to thank me for helping him and his family find peace at a very difficult time. A statement he made wrapped itself around my heart, and I knew I had some serious praying and planning to do. His words were, “The Army could use more chaplains with your love and commitment.”

The seed planted in my heart years earlier had taken root and was sprouting, and I began my journey to be an Army chaplain. When I began in 2012, I knew the odds of being accepted into active military service were slim for a man approaching the age of 40. After the extensive initial paperwork, I underwent a medical evaluation to determine my physical fitness. I failed. If I wanted to move forward with my application, I needed hernia repair surgery. A few months later, I underwent the surgery.

A short time later, I learned the master’s degree I currently held did not meet Army requirements. The additional degree would take at least two years—another roadblock on my journey. While in school, I stayed in contact with my local recruiter. During the final semester, the recruiter contacted me with yet another detour. To qualify as an Army chaplain, a candidate needed two years of preaching or pastoral experience. Initially, I wasn’t concerned, because I have been an ordained Free Will Baptist minister since April 2008. But then I learned the two years of experience had to be acquired after the second master’s degree had been earned. I was disappointed, but I did not question God.

Before long, the recruiter called me again and advised that one year of the required experience could be waived because of my previous preaching and teaching experience. I began the one-year waiting period in December 2014, and within a year, my application packet was finalized.
The next “speed bump” in my journey came when the recruiter advised me to reapply as a reservist rather than active duty, because I had no military background. His concern was that the ascension board would choose an applicant who had served in the military. I changed my application, and yet the board still denied my application during a May 2016 meeting.

Because I knew I was on a God-ordained journey, I agreed to re-submit my application when the board met the following August. On the following Wednesday, after four long years of waiting, I finally received the call for which I had waited. I was accepted as a United States Army Reserves chaplain. Who knows where this journey will take me next?